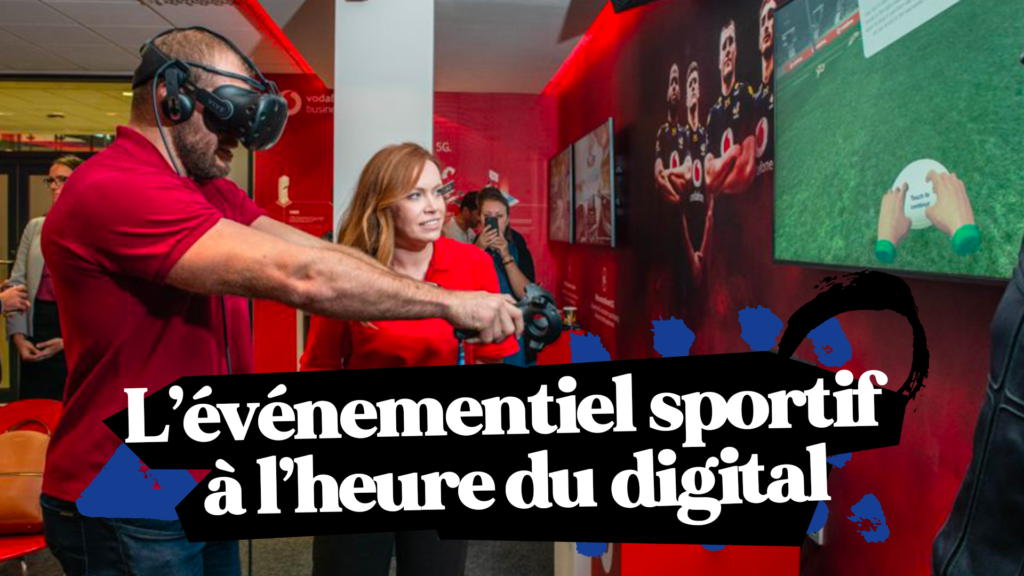 Sports events and digitalization: a transformation serving the live experience

Digitalization of sports events is disrupting the live experience and sponsorship activations. An opportunity rather than an inconvenience… and the source of the most audacious initiatives. Let’s decipher.

« The metaverse will disrupt and change the world. » Strong, concise, resolutely affirmative words… and prophetic. When Laurent Solly, Vice President Southern Europe of Meta, explained the change of name of Facebook a few months ago, he did not beat about the bush: the modern world is on the verge of a profound « technological revolution ». A « new chapter of the Internet » where virtual and real intertwine… at the price of the latter?

If this upheaval is a reality, far from the science fiction chimera; if the questions seem as understanding as they are justified… why should we fear a confrontation between these two universes rather than imagine a fruitful marriage? In sports events, the archetype of the live show never predetermined, always being reinvented, the technological revolution seems, on the contrary, to bring about promising renewals in the service of reality.

It has to be said that sport is a very special spectacle… As Franck Pons and André Richelieu reminded us in an article on the strategic marketing of sport, « the orientation [of an individual] towards a sporting event is based on the satisfaction of an emotional need (excitement, joy), a need for communion (exchange, socialisation) and a need for knowledge in the sport followed ». What do these needs depend on? From the madness of a last minute try, from the boiling tribunes of mythical stadiums… But also from the impact of the history behind legendary races, from the unspeakable excitement of a finish in Alpe d’Huez to the terrible ascent of Mont Ventoux. The « I was there! », thrown in at the bend of a conversation, which fuels unique memories.

DIGITAL EXPERIENCE AS A MARKETING CHANNEL

What effect does technology have on this? What does it bring? New perspectives. For the sporting show on the one hand; and for the whole micro-event sphere that stems from it and contributes to the fan experience, on the other hand, right up to sponsorship activations. This is, for example, the Wasps fan who, on his way to the stadium, discovers that his ticket gives him access to a very special seat… A heated VIP seat offered by Vodafone, a major partner of the club, fitted with a Samsung Galaxy Note 10+ 5G, as well as high-definition screens so that he doesn’t miss a moment of the match. Or the pre-match, with 360° cameras offering exclusive views of what the rugby fan in the stands cannot see! After ordering drinks with the smartphone provided, the fan was able to watch the match… and post his exceptional experience on the networks.

Images and comfort in the excitement of the live game. Or the perfect example of what John Rhodes, director of sports and entertainment at HOK, explains: « It’s not about privileging virtual fans over those who go to the stadium. It’s about using the digital experience as a marketing channel to get viewers off the couch. We need to exploit this opportunity to give them a unique experience that they couldn’t have at home. » 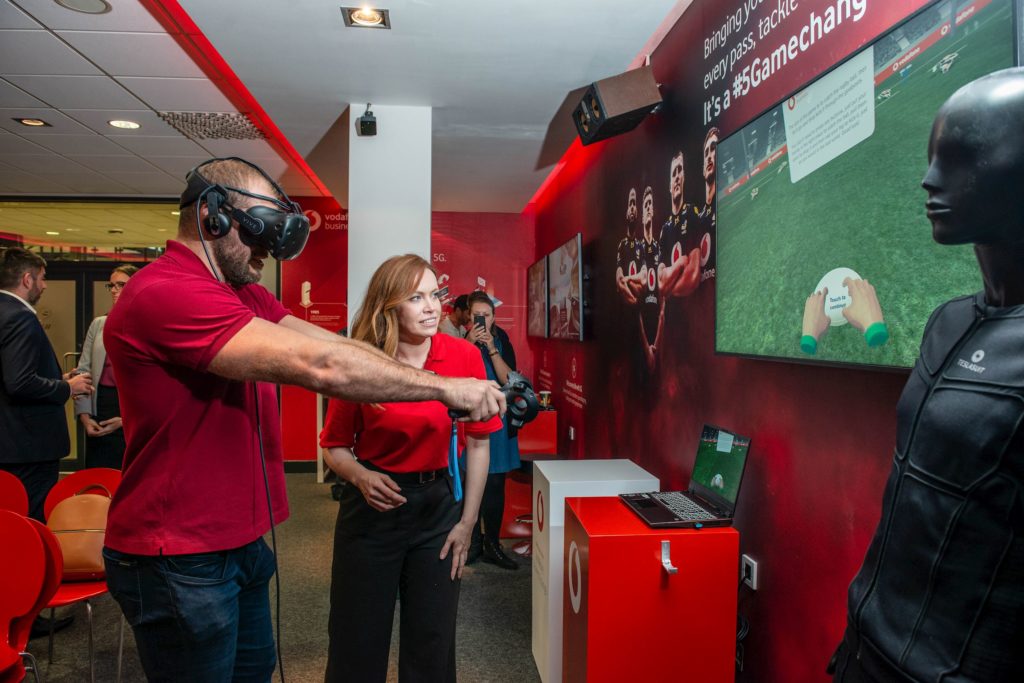 An experience that begins with the purchase of the ticket and lasts long after the event. The dematerialised ticket is now a virtual necessity, but many alternatives have been devised over the past ten years. As early as 2011, the Tampa Bay Lightning, a major NHL franchise, offered its chipped jerseys reserved for season ticket holders. Members simply had to wear them on game days to be invited in without a ticket or card. The jerseys also allowed subscribers to benefit from significant discounts in the various food and beverage outlets and in the shop. The result? An increase in the number of season ticket holders… and a stadium dressed all in blue! One more way to convince the fan to leave his couch, coupled with a guaranteed theatrical effect contributing to the special atmosphere of the matchday.

DURING: THE NEW AREAS OF EVENTS AND ACTIVATIONS

In the fan’s journey, digitalisation simplifies the « before » part. But it also contributes to the « during », of course, to the enhancement of the show itself and to the live experience. This is an obvious fact that cannot be denied, whatever the scale. This goes from the QR code stuck to the back of the traditional plastic shell seat, which allows you to download the match programme and order your drinks, right down to the smallest stadiums. The gigantic 4K 360° screen at SoFi Stadium, the site of the last Super Bowl, is 110 metres long and covers 6,500 square metres, offering live images, infographics and statistics usually reserved for the television viewer. 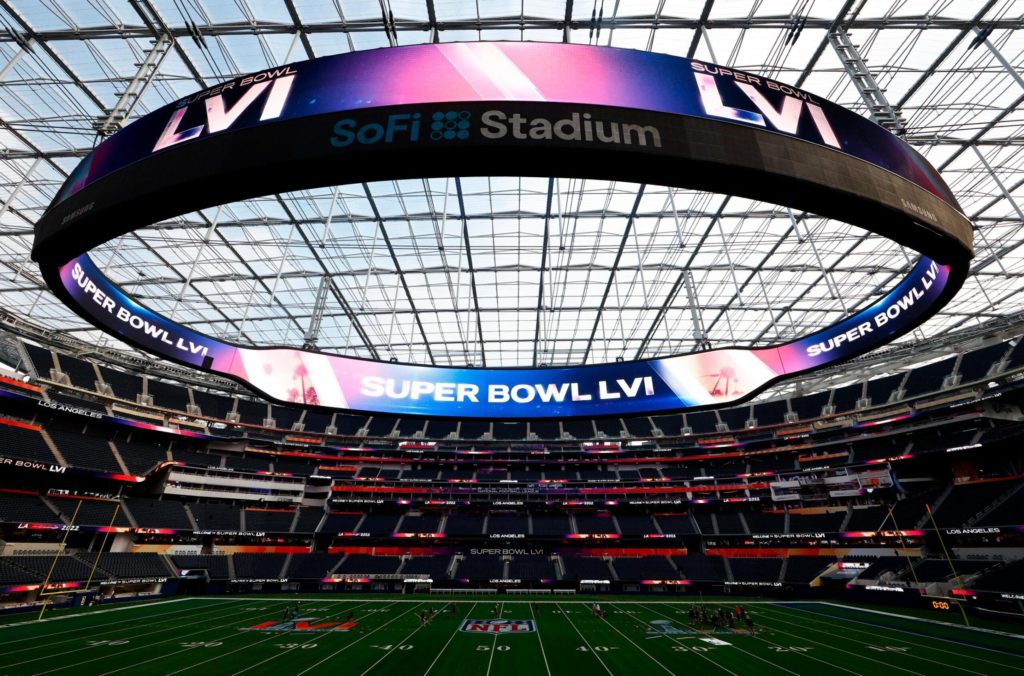 Digitalization for fan experience is best embodied by the connected stadium. « Smart stadiums guarantee fans a digital experience, from connected tickets to personalised offers during the game: this is what fans expect, especially the younger generation, »confirms Ignacio Carnero, Chief Revenue Officer of LaLigaTech, the new technology arm of the Spanish football league. « They want a more rewarding and exciting experience than what they can have at home. With the smart stadium, if a fan wants to see a goal again, for instance, they can simply point their smartphone at the goal and get a replay. If they want to see a sequence from a different angle, they will have a wide choice of views directly on an app. »

But the fan experience is not restricted to the stands. It is the entire sports entertainment environment which is being digitalised. With so many new areas to explore for sponsorship activation! An example of this? The Top 14 Rugby Tour organised each year by the National Rugby League to promote the Top 14 in all territories. The principle: a 100% rugby village set up in the heart of the city for two days with various partner stands, the presence of professional players, the presentation of the Brennus Shield, live broadcasts of matches… and a mini-pitch for initiation! To go further and engage the public, Ideactif has set up a digital trail in the village with QR codes to be scanned on each partner animation. With real prizes at the end of the trail ! 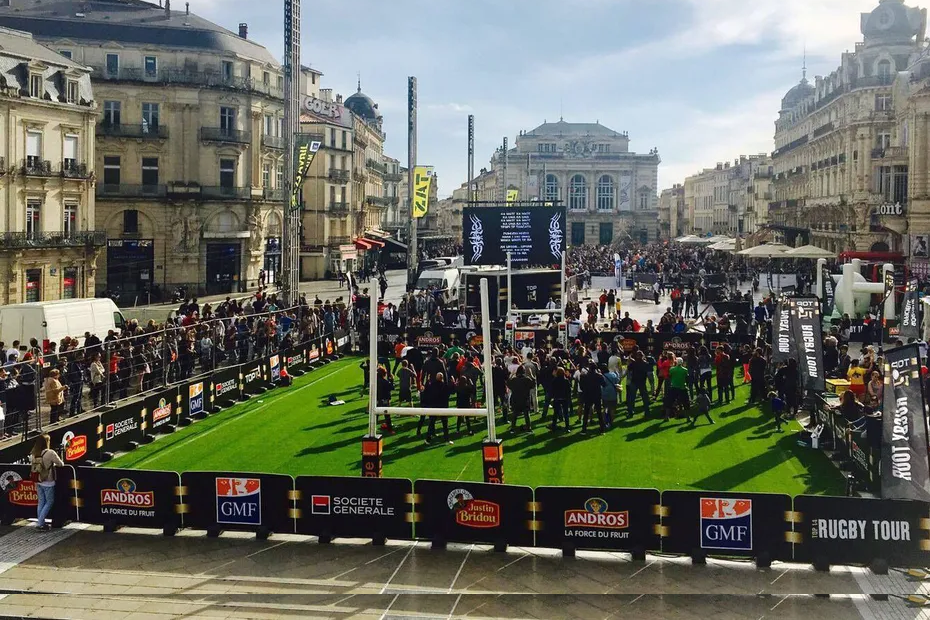 AFTER: BOOSTING THE RESONANCE OF THE EVENT THROUGH DIGITAL

Finally, digital technology makes the event last, giving it a renewable, near-permanent aspect. Because, as Masayuki Yoshida, Doctor of Sports Management, reminds, the fan experience encompasses all of his « cognitive, affective, social and physical reactions […] to direct points of contact (purchase and consumption) and indirect points of contact (media and social networks) with a sports organisation, its products or other consumers ». These indirect touch points include the many images shared by other fans and broadcasters. And this is what feeds the desire and passion in everyday life, in the expectation or memory of the event.

That’s the reason why the Cleveland Cavaliers are now offering digital collections to their fans, to ease the wait and liven up matchday… Fans who go to the stadium earn specific NFTs, which they can store in a virtual vault. During the game they won against the Pacers a few weeks ago, fans who were physically present at the stadium were able to leave with a virtual jersey and other NFTs to display in their vault. 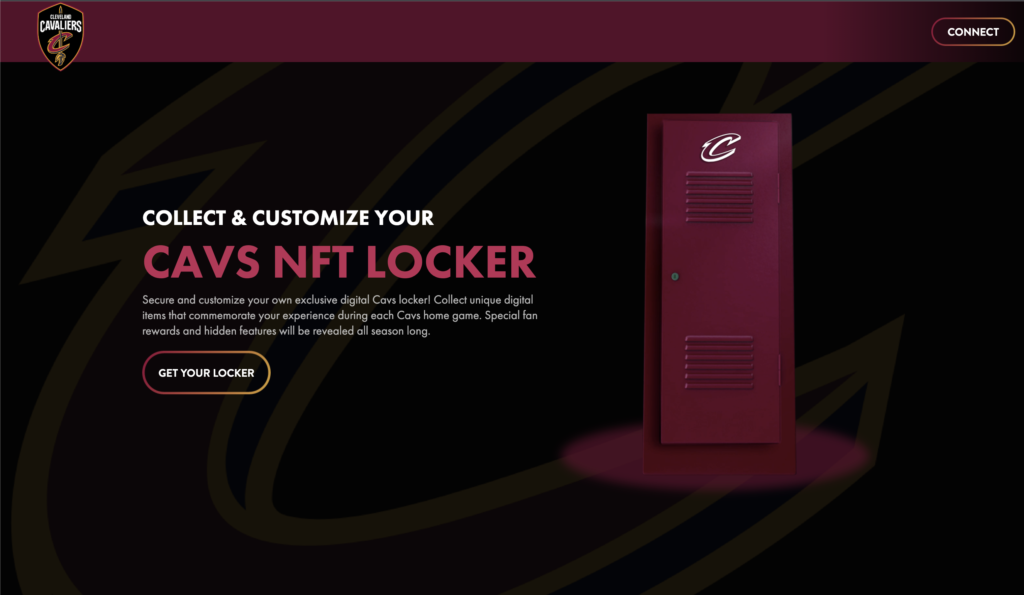 Not only does it encourage all generations to come to the Rocket Mortgage FieldHouse by reviving an age-old tradition – collecting. But it also gives substance to the testimony: the fan was there that day; his memory is precious. And if he decides, tomorrow, to give it away, sell it or exchange it, he will be participating in the permanence of the event. As well as expanding the Cavs’ popularity far beyond their catchment area. For Tom Mizzone, CEO of Sweet, NFT’s partner platform, « this is a remarkably accessible programme ». « All the fan needs is their smartphone to start collecting digital memories and complete their immersive experience. It’s a great example of how teams can use digital to allow their fans to share their passion for their favorite franchise »

This is also the lesson to be learned: digital must be able to reach far more than the 20,000 people in the Rocket Mortgage FieldHouse. And it should be a double movement: the integration of the live audience with the digital experience and of the digital audience with the live experience. Tennis Australia clearly understands this, and the Australian Open, the first Grand Slam tournament of the year, became a forerunner in January by recreating part of its website, Melbourne Park, on a plot of the Decentraland platform, in the metaverse. Fans, equipped with their VR headsets, could walk around, discover exclusive content, behind-the-scenes images, interact with players or other visitors… Better still, it was possible to acquire a 19cm by 19cm portion of each of the 23 courts in the form of an NFT. Not only did this NFT correspond to a uniquely designed virtual ball, but if the last bounce of a match ball was on your court, you won additional prizes. For the 11 finals offered by the tournament, from Gentlemen’s Singles to Juniors Doubles, the final bounce of the match ball even allowed the plot owner to win the ball in question, guaranteed by a certificate of authenticity. 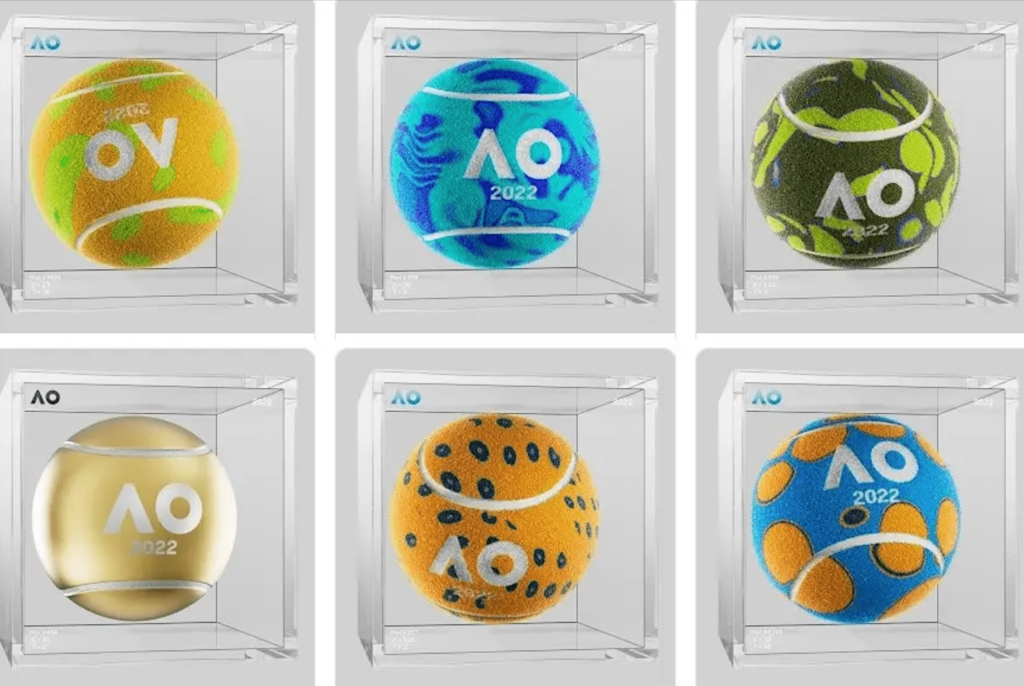 An incredible success, since, according to Ridley Plummer, project manager for Tennis Australia, all 6776 virtual balls were sold… in three minutes. The lowest price? Around €600. For a total of over €650,000 in sales. « We enjoy the idea of transforming intellectual property into digital memories and linking these memories to a concrete experience, » explains Tom Mizzone, whose platform was once again asked to market these NFTs. This is indeed the strength of such an activation: digital allows the creation of a parallel universe that abolishes the physical limits of the event, engages fans all over the world, encourages them to follow the tournament… while leading to the most concrete of results: the transformation of a banal object into an exceptional one, which the player himself, with his final stroke of the racket, physically offers to the fan. « We see ourselves as an entertainment event rather than just a tennis tournament, » says Ridley Plummer. With, behind it, the project to « offer entertainment in the metaverse during the 12 months of the year »!

In addition to abolishing geographical limits, digital technology should make it possible to abolish temporal limits, which are always problematic for an event that is held for an evening, a few days or a few weeks. So… Should we fear that the virtual will gradually devour the live experience? That activations on the fringes of events will be dematerialised… or no longer be? No, definitely not. Digital is above all another flavour of the real thing and of the live emotions that the fan feeds on. And this is perhaps the reason why the most digitalized of events, esport competitions, are sold out, offering thousands of people gathered in gigantic sports arenas their own innovative sponsoring activations!